It’s been a while since we released a free game, so here’s two!

The first is a comedy adventure, along the same line as last years The Inanimate Mr Coatrack (and with a returning character!). Try to keep your cool, as you host a disastrous episode of failing 80’s variety show, ICEBOX!

The second is a platform-puzzler, think Lemmings meets The Incredible Machine, with graphics inspired by the ZX Spectrum.

We found making levels was as fun as playing them, so we’ve made a level editor for this one too, you can export levels as text, and share them in the itch.io comments!

Thanks to the various SeaDads that worked on these with me- Louis Meyer, Adrian Vaughan, Jon Murphy, Kyle Olsen and Ivy Dupler!

Check out the steam page here for info, and follow/wishlist while you’re at it!

There’s also a press-kit with basically the same info in a much more boring layout- http://press.thedriftergame.com

END_OF_DOCUMENT_TOKEN_TO_BE_REPLACED

Welp, I’ve been working like crazy to whip my little hobby project into playable shape for PAX Aus, which means I have a short demo and a video of said demo 🙂 WOO!

Conceal your upper torso in style

We now have t-shirts! Barney’s created a bunch of awesome t-shirt art and we have two very cool designs by guest artists @sixfootewok and @Qt0ri available now thanks to our good friends at Samurai Punk who have helped us out by putting them in their online store.

Oh, and right now there’s a 20% off everything sale… Huzzah!

More adventure than you can shake a willy at

We made another adventure game in two weeks for Adventure Jam! The Inanimate Mr. Coatrack’s full of sweary undead shenanigans, jokes about willies, and a hefty amount of dismembered limbs!

We decided to do a comedy for this jam, and intended to take it easy and just have fun with it… Instead we ended up working way too hard and making our longest adventure yet. (Not including my current main project at least.)

Also, we were thrilled to come in first overall for the jam, and place first or second in each award category too! You can check out some of the other amazing entries at AdvJam.com

Another jam game for Ludum Dare 44

Here’s another SeaDads game that I helped on and that should entertain you for a few minutes over your lunch break!

The theme for LD44 was “Your life is currency” and so we decided to make a bowling game for some reason. Anyway, I had lots of fun juicing it up! Pretty happy with the result.

We’ve recently been trying out a service called Parsec which allows you to stream a game and have friends play along remotely, and we’re happy to be able to give it the Official Powerhoof™ Severed Thumbs Up of Approval®! 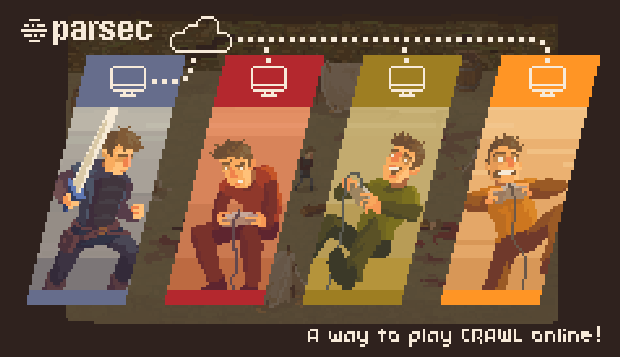 Parsec lets you stream a game and have friends watch and play along with their own controllers. Latency was my biggest worry, but it wasn’t a problem when we played, certainly no worse than our dodgy indie implementation of online multiplayer would have been!

If you want to try it out yourself, there’s more details here.

In case you hadn’t noticed the fancy widget, we now have an official discord server. Come chat to us about things, or find someone to play Crawl with!

Crawl is Out Now on Switch YAY

A portable version just in time for Christmas!

Okay, might be a slight touch of endless cosmic horror still in there…